The founder of our family bussines is Jaroslav Klacek Obročník. He made his living as a saddle maker during the 1980s and after the "Velvet revolution" in Czech grounded company named Dobra after his wife Dobromila. After making belts for Czech army and police between 1990 and 1995 with their 20 employees they came back to making leather craft on a smaller scale and continued their work only as a couple of craftsman.

While offering their leather products at the markets in Germany they met a group reenacting early medieval age from Köln am Rhein and there started our early medieval era. From this moment they started making early medieval shoes and accesories according to the sources available at the time. From this time period comes the biggest series of hand carved and brass decorated ornate sheats and scabbards for knives, swords and saxes.

We - Jana Skalská Obročníková and Pavel Skalský - took over the wheel in 2015 and the parents are mostly busy with their summer rental house and archery 3D parkour. Following the tradition of making the early medieval shoes we try to keep up with the trend of reenactment and pushing the patterns a little more to historical accuracy. As our hobby lies a tiny little further in history (in 14th century reenactment) we also started to make accesories for 13th to 15th century.

We make also modern time leather accesories throughout the whole history of our bussines. Our leather products are mostly embelished by pressed or carved historical motives. 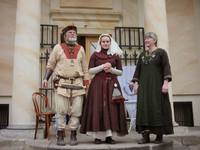 You can set a meeting with us via email or facebook  to meet us in our workshop in Skalany or on some event.

We use cookies to enable the proper functioning and security of our website, and to offer you the best possible user experience.